Chef Reuben Riffel on what it takes to achieve success

“I was just drifting at 18,” says MasterChef SA judge Reuben Riffel. “My mom Sylvia worked at Chamonix restaurant in Franschhoek. She organised me a job as a barman and waiter. As it happens in small restaurants, it gave me an opportunity to be in the kitchen.” 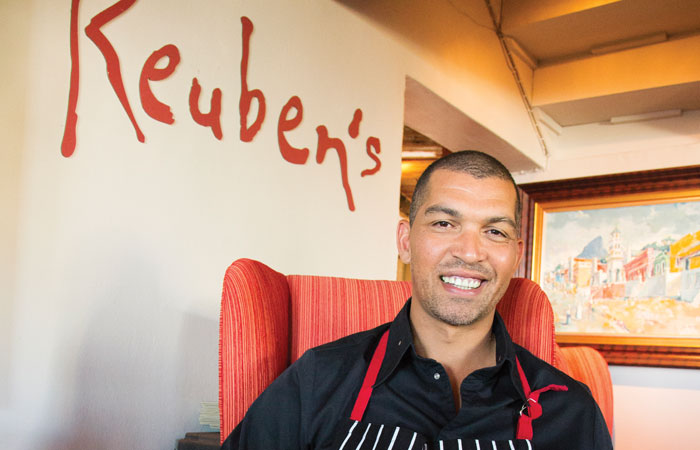 Reuben worked as a kitchen hand under a French chef, where he was taught to make potato gratin and to debone legs of lamb and tie them. “I was very scared of everyone, but was loving learning new things,” he explains. “Shortly afterwards chef Richard Carstens took over, and I still wasn’t always sure it was for me. I was working long hours while my friends were chilling at the beach. But I stuck it out.

There were many times I felt like I was going to get stuck there. Doubt is normal, but you have to realise you are in control of your own life. A lot of people have that experience early in their career. The better stuff comes later – people get to know you, and opportunities come up.”

Reuben’s childhood in Franschhoek involved gardening, food gatherings and family. These elements played another important role in shaping his culinary career from a young age. He regularly helped his grandfather harvest fruit and vegetables from his garden. The family slaughtered chickens and pigs on occasion, and shot pigeons to eat. “It’s nice to see a cool butchery, but we must understand where our food comes from,” he says.

Reuben’s first big career opportunity came about when Franschhoek’s Monneaux restaurant was looking for a head chef. “I think I showed I had a knack for cooking,” he says. Chef Carstens recommended Reuben for the job, and the next year Monneaux made the Eat Out guide’s Top 10 restaurant list. “That’s where people started to notice me,” Reuben grins.

Local work offers came rolling in, but he stuck to his plan: Reuben wanted overseas work experience, which is important for any chef. He was given the opportunity to open a restaurant in Cambridge, England. But it wasn’t long before former customers from Franschhoek tracked Reuben down and offered him his own restaurant back home.

The offer was too good to refuse. The chef returned to South Africa and Reuben’s opened in Franschhoek in 2005. Reuben Riffel hit the jackpot as a chef in 2006: Reuben’s restaurant won both the Eat Out ‘Restaurant of the Year’ and ‘Chef of the Year’ awards.

Initially Reuben says he focused on being a great chef. The awards put him under pressure to maintain standards, so what was supposed to be a casual family restaurant morphed into a sought-after upmarket bistro as word spread. But once his kitchen was under control, Reuben changed tack and started taking the opportunities on offer to him in business.

“Once you’re successful as a chef and restaurateur, you have to make a decision: do I keep it as is, or capitalise on this and grow it?” he says. “Either you make your restaurant bigger, or find other opportunities. Initially I said no to expansion, until I decided to think differently.”

He still owns the flagship Reuben’s restaurant in Franschhoek. But in recent years Reuben has trained chefs and empowered them to operate restaurants that he oversees in a consulting role. They include the Reuben’s One & Only, Robertson’s Reuben’s at the Robertson Small Hotel, Reuben’s at Abalone House in Paternoster, and Franschhoek’s Racine at Chamonix winery.

Does being a celebrity affect Reuben?

In the beginning he admits he was taken in by some of the hype that people wrote about him. “But I’ve realised you must portray yourself as you are,” he says. When people ask for autographs and pictures now he humbly obliges, but doesn’t buy into the celebrity thing.

“When you’re on TV and things are rehearsed, it feels forced. Through interactions with people on MasterChef talking about a dish, I can really be myself. I did find it very difficult to allow people to continue doing the wrong thing on the show. I got into trouble about that!”

Operating so many restaurants and other businesses means Reuben isn’t in a kitchen daily. “If you talk about cheffing, we’re being judged all the time by diners. When a customer goes to a restaurant, they usually look to the chef as the person responsible,” he says.

“I’ve been lucky that I built up a core group of chefs who assist me in what I do. Sometimes the staff have personal issues that affect my businesses, and then we invest more time in sorting that out.” Reuben focuses on the cookbooks and TV endorsements, while his chef team mostly run the restaurants. “I’m still involved, but they have to buy into what we’re about and take ownership of it,” he says.

“Being a restaurateur, I often think maybe I should have only one restaurant and have control. But I’m not going to take the safe route. I’m going to challenge myself,” grins Reuben. “You can either be the guy that wants to put his arms around what he has to control. Or you can become good at training and delegating and inspiring people to do things the way you want it to be done. More difficult, but not impossible.”

Reuben’s super-organised wife Maryke is very involved in running his businesses, and is also his manager. Together they own a KitchenAid shop in Franschhoek, and Reuben has produced three cookbooks. Aside from being a MasterChef SA judge, he is paid to endorse Robertsons Spices in advertisements.

“We have different characteristics. Maryke is organised and very straightforward. She keeps things together,” he says. “She’s also a mum and creates a family environment for us.” Their children are five-year-old Latika, and Max, aged two. “Working with someone you trust in restaurants goes without saying. Someone who knows your good and bad elements is also important.” 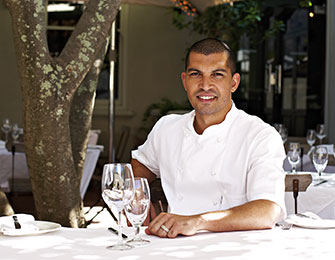 Visit chef career page for a career overview, qualifications needed, where to study, school subjects required and a career interview.