Golden-voiced South African soprano Pretty Yende is the toast of the global opera scene – but at heart she remains a small-town girl living out her big dream. 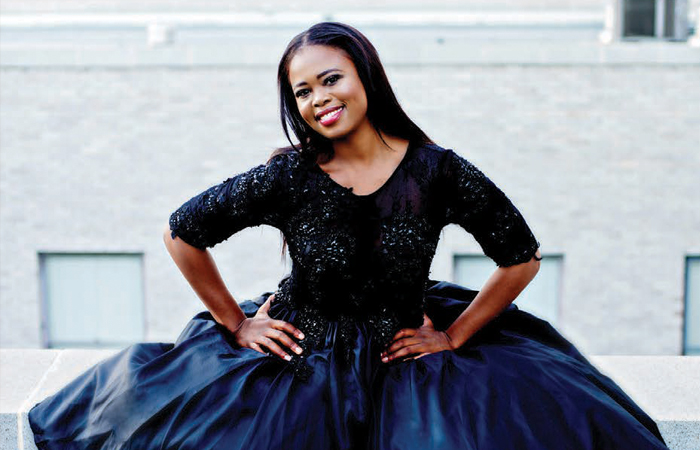 Last year, the 29-year-old singer was awarded the Order of Ikhamanga in silver by President Jacob Zuma, one of the highest national honours the country can bestow. Yende was recognised for operatic achievements and her positive influence as a pioneer, role model and cultural ambassador.

Last year, the 29-year-old singer was awarded the Order of Ikhamanga in silver by President Jacob Zuma, one of the highest national honours the country can bestow. Yende was recognised for operatic achievements and her positive influence as a pioneer, role model and cultural ambassador.

At the time the Department of Arts and Culture hailed her, saying: “By excelling in the complex and sophisticated genre of opera music, you have transcended barriers. You have proven your worth in a genre of the arts that few African people dare to enter.”

And to think it all started as a bizarre twist of fate in the humble Mpumalanga dorp of Piet Retief – hardly the place you’d picture as the birthplace of future globetrotting singing sensations.

In fact, rewind just over a decade to the turn of the millennium and the teenaged Pretty Yende had never even heard of opera music.

It was a chance encounter that sealed her destiny: one day the iconic British Airways television commercial, featuring the exquisite Flower Duet from Leo Delibes’ opera Lakmé, grabbed her attention and refused to let go. Enchanted by this beautiful but unfamiliar music, she immediately set her heart on becoming an opera singer.

“Opera didn’t exist for me before that,” admits Yende, who had grown up being familiar with choral music, but having no exposure to classical music. Yet something inside her instinctively stirred and responded to opera, and her future path was set from that moment on.

When luck, talent and fate collide

So began Yende’s exhilarating rollercoaster ride to worldwide acclaim. She graduated from the Young Artists Academia of La Scala, and went on to perform in several professional productions at the world-renowned Italian opera house.

Her ascent to fame was clearly well on track, thanks to hard work and perseverance. But last year, what was to become the highlight of her career came without warning when she made her debut at the New York Met under the most challenging of conditions.

Yende was called in at the last minute to play the Countess Adèle in Rossini’s Le Comte Ory after another singer fell ill – and despite having only a week to learn the demanding role, her performance was hailed as a triumph. The Telegraph praised her “diamanté tone and megawatt smile” and the New York Times noted the “bravos, whistles and whoops” that greeted her curtain call.

“Somehow, we always know what we want to do or what feels right for us to do – yet we get discouraged and lose focus because they seem impossible, or because of the negatives.”

This year, she will reprise the role at La Scala (she calls Milan “my second home”), and will return to the New York Met for Mozart’s The Magic Flute. This is in addition to clocking up debuts in Paris, London, Munich, Barcelona, Norway and Los Angeles, with a CD recording also on the cards.

Yes, it’s safe to say that Pretty Yende has cracked the big time – and to think she stumbled on her life’s calling almost by accident!

She therefore has full empathy with her fellow young South Africans who are unsure of what career path to pursue. “I would advise them to really start looking inside themselves,” she says. “Somehow, we always know what we want to do or what feels right for us to do – yet we get discouraged and lose focus because they seem impossible, or because of the negatives.”

Giving back to the community

Having scaled such dizzying career heights at such a tender age, it would be natural if her head started to swell. But she maintains that she’s still “Pretty from Piet Retief”, adding: “No matter how exalted or successful you are, there’s no place like home. My family is my pride and I’m very, very blessed to have them and still be me.”

In fact, she harbours so much affection for her hometown that she recently launched the Pretty Yende Foundation, which aims to educate young people in and around Piet Retief about classical music.

“My dream is to have at least one child in each village home being able to play a classical instrument,” she says. She also tries to return regularly to South Africa to perform. Last year, she packed out the Montecasino Teatro and Artscape Opera House with two magnificent concerts and, in 2015, she will be starring in Gauteng Opera’s production of Verdi’s Rigoletto.

Home and her Christian faith are what keep her grounded, she says: “It has been important for me to keep my feet planted firmly on the ground, never losing my identity and my purpose – and that has made a huge difference in terms of not allowing external pressure to interfere with my goals.

“My priorities are very clear: I want to make art, and that goal means I need to keep in mind my time and work ethic, knowing that my growth will be in full view in front of millions. I must always remember that I started this journey for music and music alone, and if I serve well, my relationship with my audience will be healthy.”

When not hitting the high notes with soul-stirring arias, Yende enjoys listening to gospel music “to enrich my spirit” and jazz to “relax and recharge my batteries”. She is a firm believer in the unifying power of music. “Music is universal,” she reflects. “It is limitless and it has no boundaries. I am very grateful to be part of this, the greatest gift to humanity.”

Even though she considers herself blessed to have discovered her passion, she admits that there were several obstacles that she had to overcome – including being plagued by self-doubt; believing her colleagues to be more talented than she was.

“We are all familiar with the saying: ‘To whom much is given, much is expected’, and so it is in my case,” she reveals.

“One of my biggest hurdles was to accept and believe in my talent. I had to accept that everyone is uniquely talented and special in their own right – and that is a lesson in life as well: learn to love yourself, accept who you are and celebrate and serve the world with your unique talents.”

Yende confides that she has learnt to trust her instincts and allow them to guide her. “After all, we were all born for a greater purpose.”

It is this positive and inspirational attitude that, coupled with her obvious vocal talent, has propelled Yende to where she is today: the darling of the international opera world. But it wasn’t a matter of overnight success: she first had to study and put in the hard yards before reaping the rewards.

She therefore is a strong advocate of tertiary education, believing it is important to shape and hone one’s natural gifts: “After all, knowledge is power. It was not enough for me to have the voice or the talent: it was very foreign to me, like finding a rare special stone that required my full attention and exploration to know how to preserve it and use it to its utmost potential – and that required acquiring a lot of information.”

INSPIRING WORDS FROM OUR DIVA-IN-THE-MAKING